Home berm Why salt marshes are important for scientists? A non-geo student’s POV

Why salt marshes are important for scientists? A non-geo student’s POV 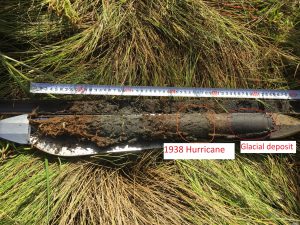 Those who are following my blog might get confused that why I said ‘non-geo’ being associated with the geoscience department. Yes, it’s true. Though I’m a graduate student at geoscience department, I’m not a hardcore geologist. I studied environmental science in my undergraduate and graduate program. Environment means everything, and yes geology was also a part of it.

Many people who are from the coastal region may find this article as a very general but those people who are from mountain regions like me will get some information out of it. This is because mountain people do not have the opportunity to confer with oceans and related areas in their own country. As a part of my ‘Coastal Geological Hazard’ course at URI, Prof Simon Engelhart took students to a site called Fox Hill Salt Marsh located at Jamestown in Rhode Island. The area is under a long-term observation for research and demonstration purpose. When I was returning from the field trip, I thought to write this article though the actual writing task was assigned to other students. I studied a few pieces of literature and wrote the article on my own.

Salt marshes are the wetland areas close to the salt ponds or ocean beach which are regularly flooded by tidal waves from the ponds or oceans, and most of the marshes are flooded twice every day with the high tides. They are ecologically important because the transitional zone supports many plants and animals. As the name itself clarifies, the marshy land close to the saltwater is the salt marsh. Being in the vicinity of the sea, the marsh and their depositional feature are the great source of information for paleoclimate and other environmental reconstruction. Therefore, the marshes are becoming the hot cake for the paleo-scientists who are interested to analyze the historical climate, sea level, coastal storm, and other coastal hazards.

The Fox Hill marsh was on the other side of the big berm which retains the high energy of the ocean. Bombs are generally necessary to form the salt marshes on the other side. The professor mentioned that the marsh was formed 440-450 thousand years ago. I used to be always upset when geologists talk about the geological time scale (they call millions of years as if it was just yesterday). There are different techniques for estimating the dates, and one of the popular is radio-carbon dating. Unfortunately, the radio-carbon dating technique cannot estimate for the last 300 years. The marsh used to get inundated once a month. There was a clear stratification of plants in the marsh area. Even if there is abundant water, the plant species found were drought resistant because plants do not like to uptake saltwater. Small needle-leaved plants were found close to the water level and then bushy to the tree when we move landward. Details of salt marsh plants are available here. There are big industries in Rhode Island who are producing animal feed from the salt marsh hay.

Sample coring was the other objective of the trip. There were different tools to take the cores out of the ground. Professor discussed the pros and cons of different tools available for coring and one of the important points to note that the sample should not be disturbed and contaminated while coring and storing. As noted above, we saw different depositional features which are signatures of different events happening past in the coastal areas. From the picture on the right, we can guess the 1938 Hurricane depositional feature. However, it needs further laboratory verification.

As a student of water science, I see water first. At some points, the water was flowing from the marsh surface to the salt pond. I wish I had my little hand-held tool to measure the salinity so that I could tell people that whether the groundwater is discharging to the pond or it is rainwater (we had a big rain the day before) or the tidal water is reverting back to the pond.